Ready to feel empowered, get stronger, and join a vibrant community? Anna Kaiser Studios gives you a comprehensive fitness program through a variety of exclusive class offerings and services.

We are unique in our ability to bridge the gap between a boutique fitness studio, personalized training, and wellness.

All skill levels are welcome and encouraged. Take the challenge 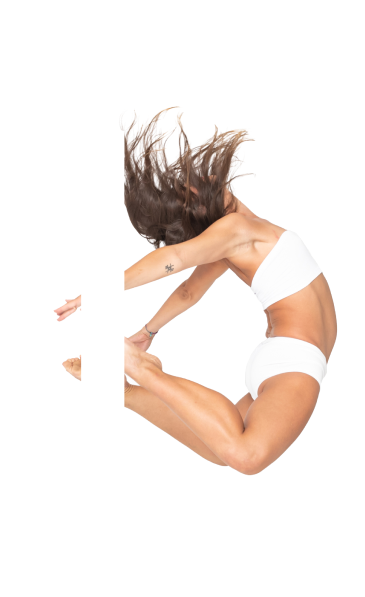 Our infamous DANCE-CARDIO class pairs heart-pumping routines with strength intervals to get you everything you need for a fun and results-driven workout - bonus: dance party moves that you’ll be practicing with friends in and out of the studio. Instead of heavy plyometrics that is repetitive on your body, Anna Kaiser integrated dance as the form of high-intensity cardio within that HIIT training model. Get results much faster than you would with a long cardio workout while having a great time moving your body.

You want a fun, vibrant workout that burns fat while building muscle and increasing your stamina and endurance.

This exclusive members-only class is progressive DANCE-CARDIO that builds on previous content for a non-stop heart-pumping class. Our members string together content stretching back 8 routines and leave it all on the dance floor. Combined with strength and stretching, this class is a maximum calorie burn. Yes, you will need that extra towel. PS Members - if you want to attend, schedule a private training session, get caught up, and jump right in!

You have previous dance experience.

Our modernized STEP class delivers a truly unique interval training experience, incorporating a box and overhead band system that will leave you dripping with sweat, all set to an endorphin-rushing playlist. You will alternate between cardio segments and 4 strength intervals. This class will give you a workout “high” you’ve never experienced with a mix of lunges, pushups, jumping jacks, moving squats, and so much more.

You want an athletic conditioning class unlike any you’ve ever experienced.

Designed to create long and lean muscles while challenging your stamina, this toning class incorporates low weight with high repetitions to burn out every muscle in your body with a workout like no other. We will focus on strength segments lasting 15 minutes each which target your upper body, lower body, core, and finish with guided deep stretches.

You want to build muscular endurance through a low-impact strength class that incorporates Barre and Pilates-inspired movements.

Two classes in one! This class combines the content and choreography of our DANCE class with our SCULPT format. It’s a great intro to both types of classes and the results are insane.

You want an upbeat cardio workout and an intense 30-minute full-body burn to target your core, upper body, and lower body.

This is the best of concierge fitness. Our Private Training program gives you one-on-one access to Anna Kaiser Studios and our elite trainer collective. You and your dedicated trainer set the pace, choose the type of workout and strategize on the best ways to attain your fitness goals. Live the fitness dream.

Workout with us worldwide via our virtual class options. If Covid taught us anything it’s that our health is a top priority no matter what’s happening in the world. Access classes from a library of content or choose a LIVE virtual class

Class content changes on the 1st and 15th of each month. This includes choreography, strength workouts, and interval exercises.

Life hack: While our instructors break down the content in every class, we recommend participating in your first class closer to the 1st or the 15th when the content is brand new. Anna personally creates and releases content for all sessions and classes on the first of every month.

When you attend an Anna Kaiser Studios class, everything you need is right at your fingertips. Fully-stocked showers, lockers, workout towels, water, and dressing rooms are available at every class.

We offer classes at three locations:

Located at 244 E 84th Street, New York, NY (between 2nd and 3rd Ave). Anna Kaiser Studios can be found on the 4th floor (with both elevator and stair options).

Located at 3 Railroad Ave, East Hampton, NY. Our studio is next to Hampton Chutney. Parking is available behind the building.

Located at 3 Railroad Ave, East Hampton, NY. Our studio is next to Hampton Chutney. Parking is available behind the building.

HOW DO I GET STARTED?

We recommend that everyone begin with a personalized trainer consultation to assess their background, fitness level, and goals. From there, the trainer will create a program plan that meets your schedule and fitness needs.

Access every studio location and full virtual library, a fitness concierge, priority registration, and a private locker with laundry service.

Monthly Membership (for New Cannan Only) -$600

Anna Kaiser is the Founder and CEO of Anna Kaiser Studios. Anna is renowned for transforming the bodies of clients around the world. Her signature workout program combines dance, Pilates, and sculpt toning that leads to visible results. Through her online streaming membership program, 3 flagship studios, and unique content creation, Anna has helped transform thousands of clients’ lives and bodies. She has quickly become one of the industry’s most highly respected and reputable experts. Her clients include Kelly Ripa, Shakira, Karlie Kloss, Sarah Jessica Parker, and now YOU.

Classes at Anna Kaiser Studios are a level above any other. Here’s what gives us our edge:

With an extensive background in professional dance, performance, sports medicine, and exercise, Anna Kaiser brings you the expert programming of a celebrity trainer amplified by the energy of a vibrant fitness community. The strategic combination of strength interval training, Pilates, yoga, and dance caters to all fitness levels and delivers unparalleled results. Each of our trainers has over a decade of experience and holds a certification with the National Academy of Sports Medicine, in addition to other high-level certifications specific to their field.

Your One-Stop-Shop for Boutique Fitness.

Get everything you need from personal training to nutrition, recovery, performance metrics, a personalized class program, and more to help you reach your goals. We focus on keeping transitions short and intensity high while still encouraging proper form and increased flexibility. All our workouts are movement based and rooted in functional training, giving you the best results physically and mentally within a vibrant community.

When does Anna Kaiser teach classes?

Anna teaches 4 classes per week in NYC - 3 open classes for all skill levels and 1 Advanced Dance class. Book your class with Anna here.

Which qualifications do your trainers have?

The trainer collective at Anna Kaiser Studios is hand selected and trained by Anna. Every trainer has over ten years of professional dance experience and holds a certification with the National Academy of Sports Medicine. We prioritize continuing education; our trainers have earned additional certifications including pre and post-natal, CHEK method, Conditioning Exercise Specialist (CES), and special populations. Each has expertise in their field, is an experienced teacher, and has a passion and love for movement and boutique fitness.

How often should I go to class to see results?

While the exact timeframe a person notices results will vary, we recommend committing to at minimum 3 classes per week for four weeks. Most people feel the difference in their bodies after 4 classes and can see the difference in 8 classes.

Are your classes heated?

The room is maintained at 75 degrees.

I can’t dance. Can I still take your dance class?

Yes! Each of our classes is accessible to all fitness levels, including beginners. And because each of our class instructors is certified with the National Academy of Sports Medicine (NASM), they are able to tailor the class to accommodate a variety of fitness levels and any necessary modifications.

Do you have sprung floors?

Yes. Each of our locations has a unique proprietary sprung floor created by Anna.

Should I wear a heart rate monitor in class?

We encourage you to wear a heart rate monitor or other monitoring device. This enables you to track your work in classes and share the report with your trainer, who can continue to hone your workout program based on your progress.

Can you tell me more about Anna Kaiser?

Anna has been featured in Vogue, The NYTimes, Cosmopolitan, US Weekly, The Today Show, Good Morning America, SELF, Glamour, Shape, WWD, E!, InStyle, W Magazine, Women’s Health, Well&Good, and has been a contributing editor for People Magazine. Anna co-hosted the primetime ABC Series “My Diet is Better than Yours” and partnered with Target to create the C9 Limited Edition by Anna Kaiser, available in stores nationwide. NBC’s "Know Your Value" deemed her the "reigning queen of fitness" and she was selected as one of Greatist's 100 Most Influential People in Health and Fitness.

She has hosted holistic wellness retreats in Mexico, Costa Rica, Austin, Ojai, and Martha's Vineyard, and continues to train and travel internationally.